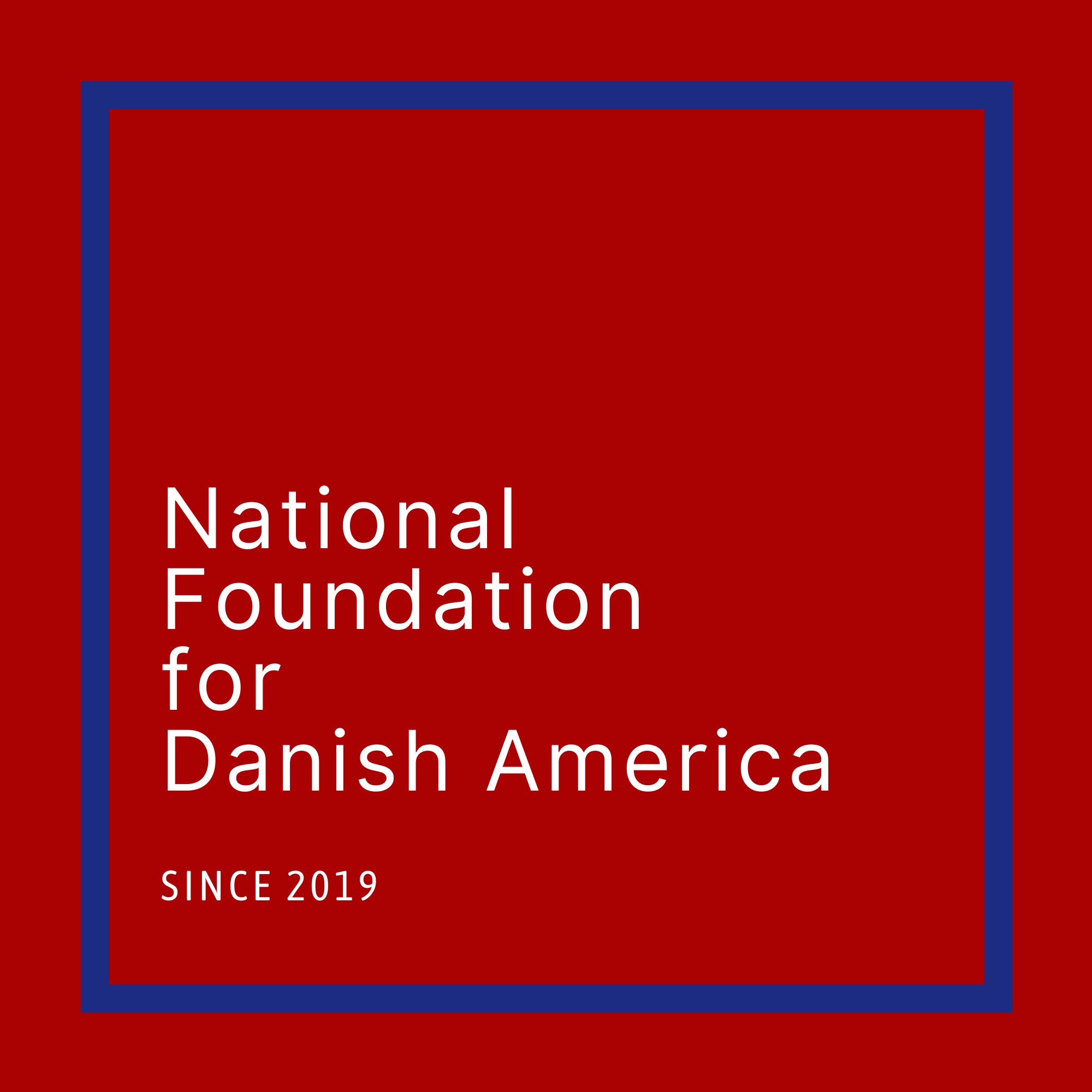 The National Foundation for Danish America (NFDA) was formed in 2019 with the goal of strengthening cooperation among Danish American organizations and ties between Denmark (or Danish Culture) AND persons who have a special interest or relationship with Denmark. There are approximately 1.5 Million Americans who claim at least partial Danish heritage, and call themselves “Danish Americans”. We aim to provide opportunities for Danish Americans and their clubs and organizations to network, coordinate, share and collaborate in order to preserve and promote Danish culture and heritage in America.

The mission of the National Foundation for Danish America is to further and enhance cooperation among all Danish American organizations and to strengthen the ties between Denmark and people throughout North America, who through ancestry and interest have a special relationship with Denmark. 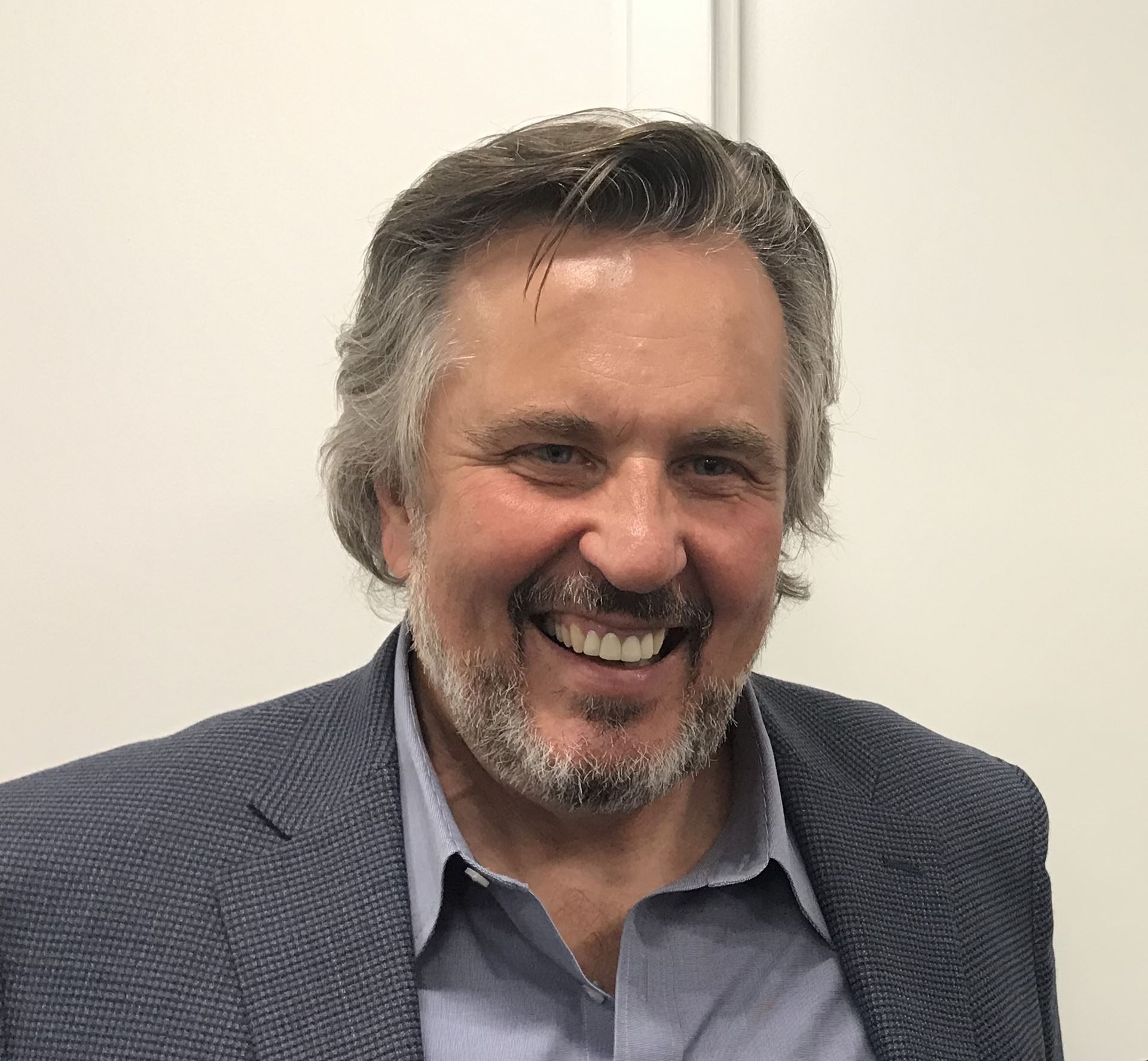 Co-founder and President of the National Foundation for Danish America, Bruce Bro has been active in the Danish American community for years. A third generation American, he proudly claims a Danish heritage with a heavy “Jysk” flavor. His maternal grandparents emigrated from near Aalborg. The Ringkøbing area of West Jutland was the home of his father’s parents. His paternal great-great grandfather served in the Danish Army during the Schleswig-Holstein border war of 1848-50. In the early 1900's, grandparents on both sides passed through Ellis Island and headed to the Midwest to farm and raise families. His mother was one of nine children born on farms in the Albert Lea, Minnesota area. His Bro grandparents settled near Elk Horn, Iowa and also farmed, raising a family of twelve children. Growing up on the family farm, Bruce left to earn a degree in communications at Dana College in Blair, Nebraska and went on to own and operate a small business in Harlan, Iowa for several years. Now living with his family in Phoenix, Bruce is primarily involved with the Rebild National Park Society as U.S. Vice President, also as a board member of the Danish Home Foundation in Chicago, and is a member of the Danish Lutheran Church of Yorba Linda, CA, the Northwest Danish Association in Seattle, Danes Worldwide and the American Scandinavian Foundation in New York.

“My love for my Danish heritage comes from my parents and my 19 aunts and uncles, all of whom had a great love of their Danish roots. Unfortunately, my grandparents died when I was very young, so I didn’t have an opportunity to hear their stories first hand. But my parents, aunts and uncles have done a wonderful job of writing down family history including stories and saved letters written between my grandparents and their families in Denmark. As we get older, we cherish this history more and more for it provides us our identity. I know that my ancestors lived for centuries in the Aalborg area and West Jutland. Denmark has built outstanding museums to show us more than a thousand years of its history. I try to visit several of them every year. These museum visits make it possible to imagine my Viking ancestors living in their farms and villages exploring, fishing… scratching out an existence. Through the Middle Ages, the Renaissance and the Reformation my ancestors survived wars, plague and poverty. It’s a miracle that they survived, and the legacy they leave is a great blessing. We have an obligation to pass this heritage down to our descendants. I feel our mission is to help others, especially our youth, discover the rich culture our Danish ancestors gave us and preserve it for future generations”. 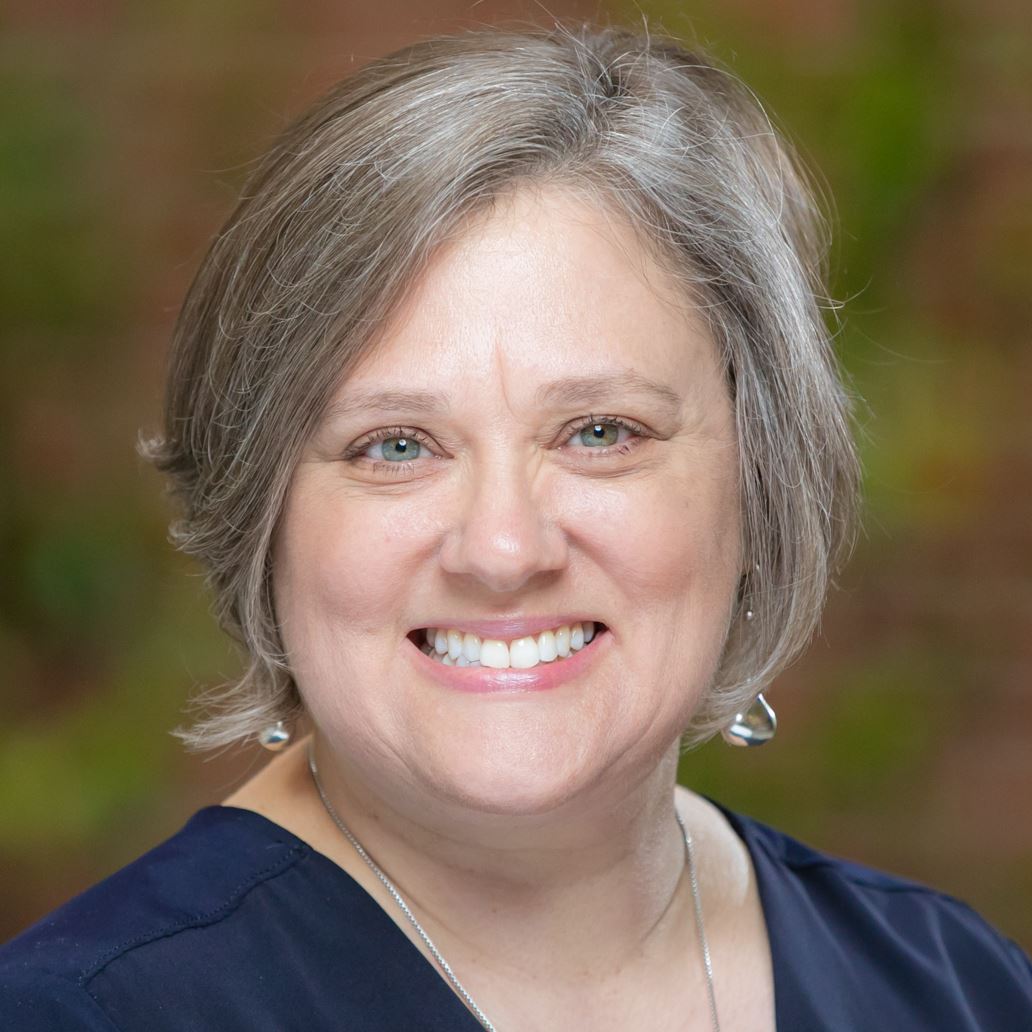 Karin Schoen Wasler is the Foundation’s Vice President. She currently works as a training program manager at the University of California - Los Angeles.

Karin’s passion for education and culture have roots in her teenage years, and have developed ever since. Her German heritage led her to an exchange year in Switzerland, a major in German, and a number of years active in the Concordia Language Villages summer and academic year programs.

A native of Wisconsin now living in Los Angeles, Karin became a student of her Danish heritage after a weekend in Solvang, California with her husband. It didn’t take much to waken her inner Dane, and she hasn’t turned back. She has extensive family in Denmark from her maternal grandfather, Ben Stehr.

Karin is currently serving on the national board of the Danish Sisterhood of America, and is a member of organizations such as the Danish Rebuild Society, the Museum of Danish America and the Danish Lutheran Church and Cultural Center. 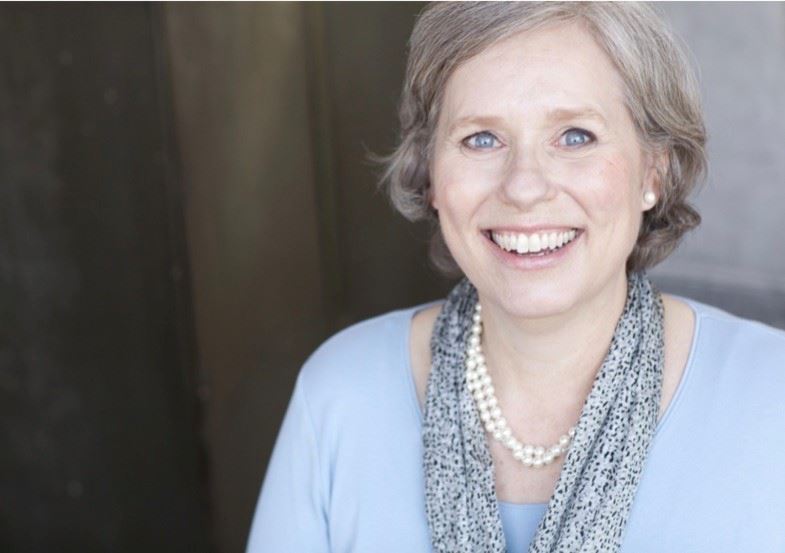 Katrine E. Vange serves as NFDA's Treasurer. Currently, Katrine is a registered CPA with experience as a Treasurer on non-profit boards.

Katrine is the daughter of Danish-American immigrants, Erik and Lissi Vange, speaks fluent Danish, and lives and was raised in and around Chicago, Illinois. While growing up, the Vange family spent many summers in Denmark, visiting relatives in Copenhagen, Kosoer, Odense, and Aarhus.

In the 80's, Katrine studied abroad at Aarhus University and also won the title of Miss Denmark-USA, sponsored by the Rebild National Park Society. In the 90's, Ms. Vange served as Secretary of the Board of Directors to the Museum of Danish America in Elk Horn, Iowa. As such, she spearheaded an exhibit on Danish-American cultural life in Chicago. In 2005, in association with the 200th anniversary of Hans Christian Andersen's birth, Katrine helped organize an event at the Hans Christian Andersen statue in Lincoln Park.

Like many children of immigrants - when in Denmark, Katrine felt the love of her parents' families - while in Chicago, she felt the closeness of the community. Ms. Vange believes that the Danish cultural values of “hygge”, creativity, egalitarianism, and resiliency have a place in and expand our American experience. Through the National Foundation for Danish America, these values can live on and be passed down to the next generation of Danish Americans. 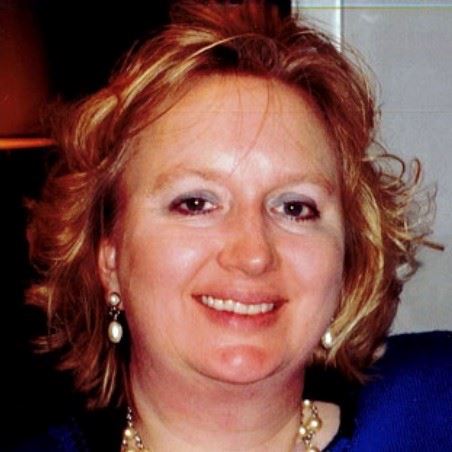 Linda is Editor of The Danish Pioneer Newspaper (Den Danske Pioneer), the oldest Danish-American newspaper in the USA since 1872, and she is also the U.S. Corporate Secretary for Rebild National Park Society, the Danish-American Friendship Organization since 2012. In January 2019, she was named the new Development Manager for The Danish Home Foundation.

In October 2018, Linda finished serving six years on the Museum of Danish America National Board of Directors, including chairing the Nominating Committee and serving as secretary of the Development/Marketing/Communications Committee. Linda is proud to say she attended every single MoDA meeting (18 meetings in all around the USA during her time on the MoDA board). Linda is also currently a board member of the Danish American Heritage Society, and she co-chaired the DAHS International Conference in Schaumburg, IL in October 2017.

Linda was born in Chicago as one of four children to Danish immigrant parents, Chris & Elsa Steffensen, who came to America on their honeymoon in 1958 from Vinderup and Silkeborg, Denmark.

Linda, who holds a Master's Degree in Marketing Communications from Roosevelt University, is a longtime member of the Danish Sisterhood of America, Danish Brotherhood in America, Danish American Athletic Club, Midwest Danish American Chamber of Commerce, Museum of Danish America, Scandinavian Park, Inc. and more. Linda is today secretary of quite a few organizations: Danish National Committee of Chicago, Dania Ladies Society of Chicago and the Chicago Midwest Rebild Chapter.

Linda has a large, extended family in Denmark and she has been fortunate enough to visit Denmark more than 25 times. Linda and her family are longtime supporters of the national Danish-American communities. Linda’s goals are to strengthen and preserve all of the Danish-American clubs, lodges, organizations and institutions and to interest the next generation in their Danish and Scandinavian-American heritage, culture and traditions. 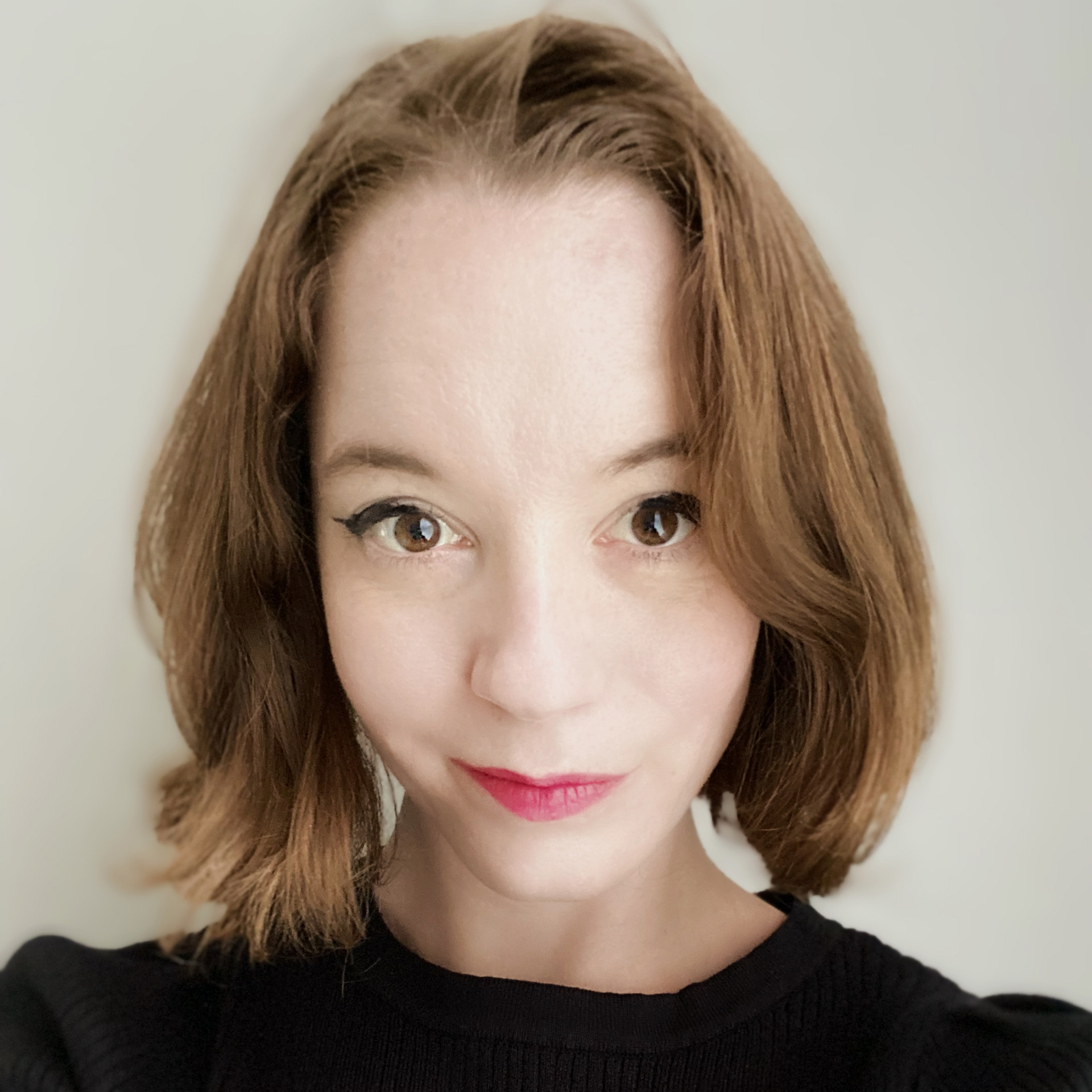 Samantha Darcy learned Danish during pandemic lockdown as an impulse, when she began writing with a Danish-native friend she met through an online community. She has always been interested in languages, having previously learned Spanish and Japanese, and her Danish studies quickly spiraled into a full-fledged obsession culminating in her work with the National Foundation for Danish America.

She holds a degree in Fashion Design and has worked as a menswear designer in Japan, textile designer, bakery manager, professional illustrator, art director for an award-winning roleplaying game series, marketing manager, and Danish-English translator. She was once rejected from a job at LEGO with a note that began “while your background is very interesting ...” and is always eager to try something new.

Samantha began learning Danish with the aid of a popular language learning app, and, when that was exhausted, studied further by analyzing song lyrics and television shows, translating parts of Neil Gaiman books from English into Danish, and reading Harry Potter og de Vises Sten. She has now written several Danish language articles for various publications, including Denmark's largest music magazine. She aspires to become a full time writer and translator, as translation is like solving a puzzle. Her favourite things to come out of Denmark are her friend Louise, Sol over Gudhjem, and Simon Kvamm.

While she has no Danish heritage that she is aware of (she does have an ancestor from Prussia, and really, you just never know), she has it on good authority from her Danish friend that she is now at least 30% honorary Danish. At LEAST. 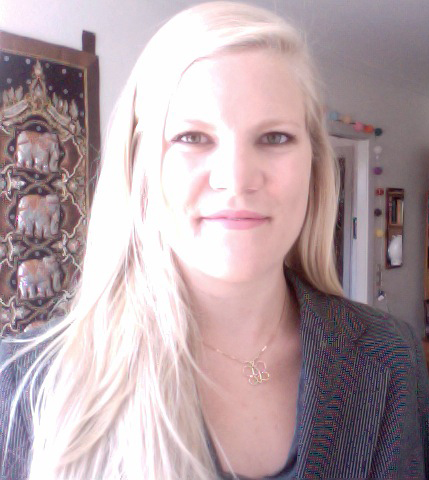 across the United States and share information about Denmark.

Having lived in different countries, immersed in a mix of cultures, she knows what it is like to

have more than one home. She is originally from the island of Falster in Denmark but grew up

in Singapore and in Los Angeles, California. Seattle was her next stop where she attended the

University of Washington, graduating in 2010 with a double degree – a Bachelor of Arts in

with a focus on Global Health.

After a year of travel and a short internship in Argentina, Line moved back to Denmark to study

at Roskilde University for a Master of Arts in Global Studies and Cultural Encounters. In 2015,

Line was hired at Northwest Danish Association and returned to Seattle. Today Line has her

own freelance business in communications.

Our Weekly E-News Updates are the easiest way to stay connected! Your subscription is FREE!